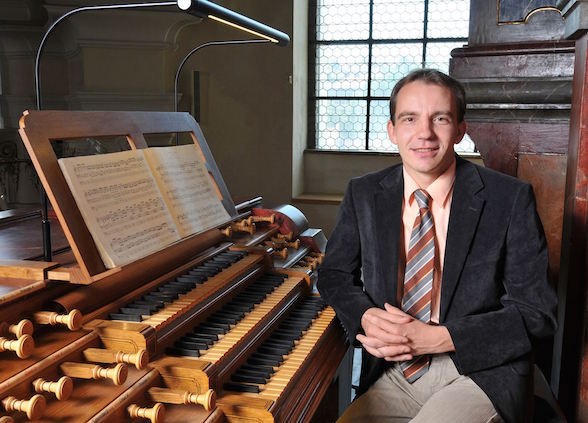 Every Thursday at 1 pm, the St Michael’s Carillon is sounded and the grand organ comes to life for a free 30 minute recital. Now past their ninth year, these recitals are well attended by the public.

This Thursday the performance is by visiting artist Pavel Kohout (Organ) – Visitor from Prague, Czech Republic it will bring the joy and beauty of live music to many Melbournians and visitors.

Winner of both, the prestigious First Prize and the J. S. Bach Prize at the one of the world’s largest international organ competition Musashino – Tokyo 2000, Pavel Kohout is regarded today as one of the most brilliant representatives of the new generation of European concert artists.

Pavel Kohout graduated from the Prague Conservatory and the Music Faculty of the Academy of Performing Arts in Prague under the guidance of Jaroslav Tůma. From 1999 he continued his studies in historical organ technique at the Conservatorium van Amsterdam in the Netherlands with renowned specialist Prof. Jacques van Oortmerssen. In 2010 he obtained degree doctor philosophiae in historical performance practice of the South German and Czech baroque organ music at the Academy of Performing Arts in Prague.

Music has an important role to play in the functioning of society and has had for many thousands of years. No human culture appears to be without music. Singing, in particular, seems to be universal. Music is invariably expressed in relation to religion. The music program at St Michael’s each week brings us some of the best musicians and music that Australia has to offer to enrich our experience during our Sunday services at special events during the year.